So, like I said in my last post, I bought Chrono Trigger for the DS in 2009, and it remained unopened in a drawer for ten years. I had every intention of playing the game. I knew I’d love it. It was just a matter of getting through some other stuff first. Like adulthood, I guess. 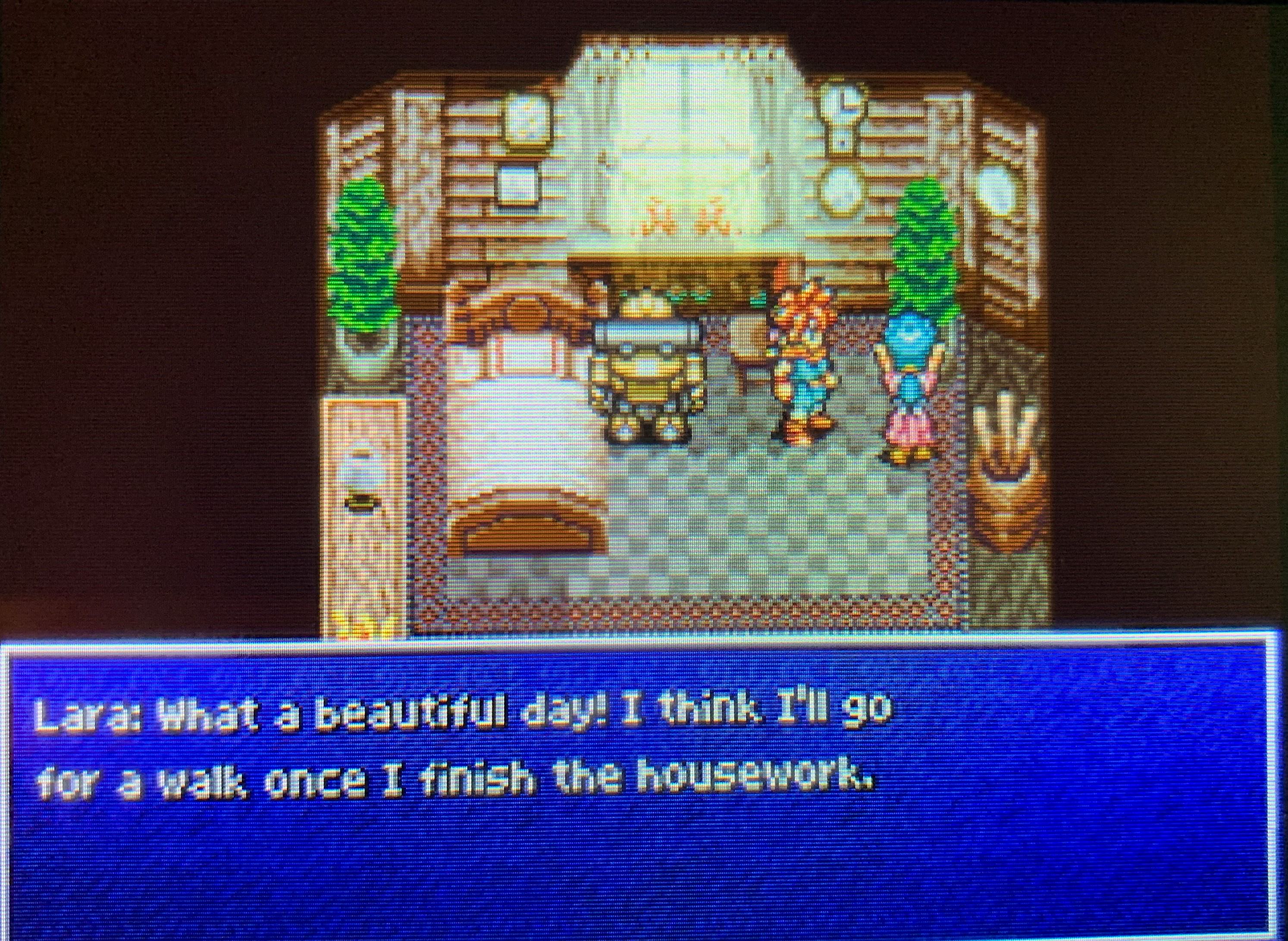 Apparently this is the preferred way to play this game anyway. It’s been released on iOS and PC, but both of those ports suffer annoying alterations that have left the fanbase cold. So I played it more or less the way it’s meant to: in standard definition on a Nintendo console.

Because it’s a DS game on a 3DS XL, I had two viewing options: pixel-perfect or blown up. Holding the start button while booting the game loads pixel-perfect mode, which leaves a pretty large amount of the screen black. It does look crisper, though. I spent about half the time in one mode and half in the other. I’m old, man. Sometimes I need things to be a bit bigger. 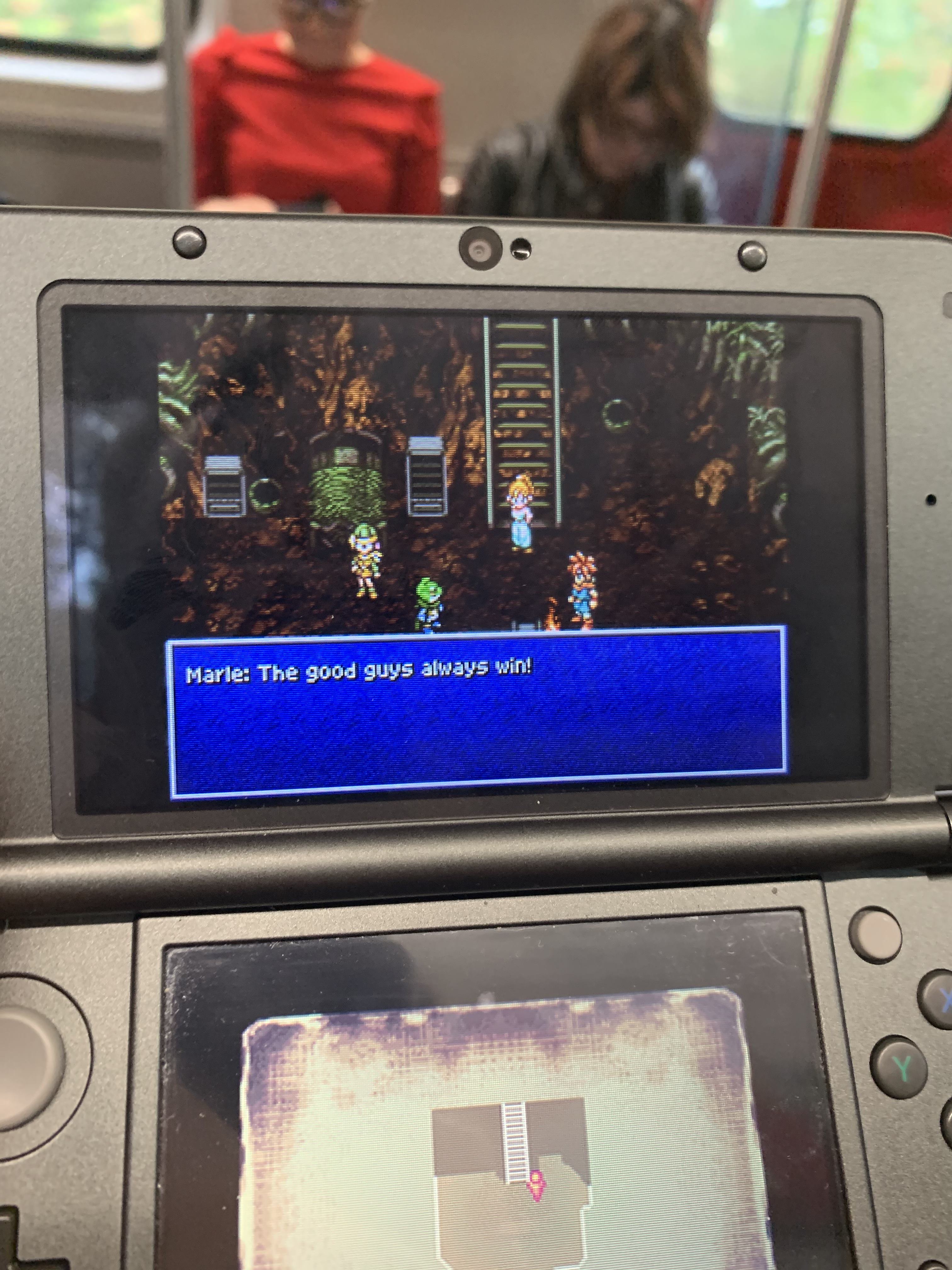 There were lots of games in the last decade I should have not played so that I could have played Chrono Trigger instead. That’s on me. I should have gotten to this sooner. But games like Chrono Trigger are why some of us have backlogs to begin with. If not for games we know will be good when we get to them, why would we keep things in a que at all? I know how to read a review. 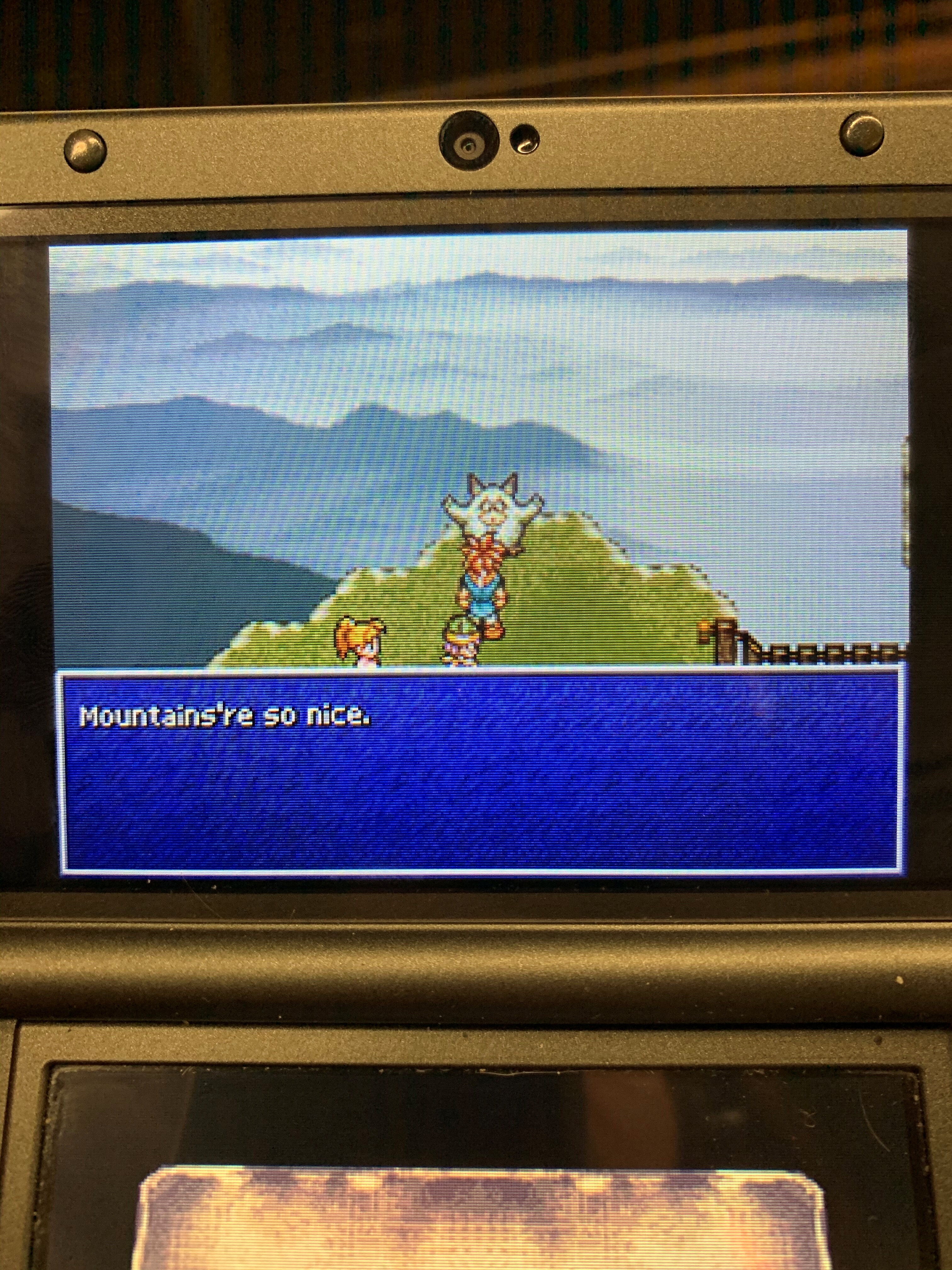 Chrono Trigger is a turn-based RPG where you select your attacks from a menu and wait. You wait a little bit less in this game because you can select “fast” in the settings for battle speed. What that really means is that you wait less but so do the enemies. It was fast enough that I had to really move in the menu lest I get pancaked by a heavy. I saw the game over screen a bunch.

I was satisfied with the ending I saw. Apparently there’s lots of them and you can only get the true ending if you play more than once. Chrono Trigger is a game about time travel, so having multiple endings makes a thematic sense here that’s lacking in other games. That may mean I only played some Chrono Trigger and not all of it, but life is too short for multiple endings. I have a backlog to get through. 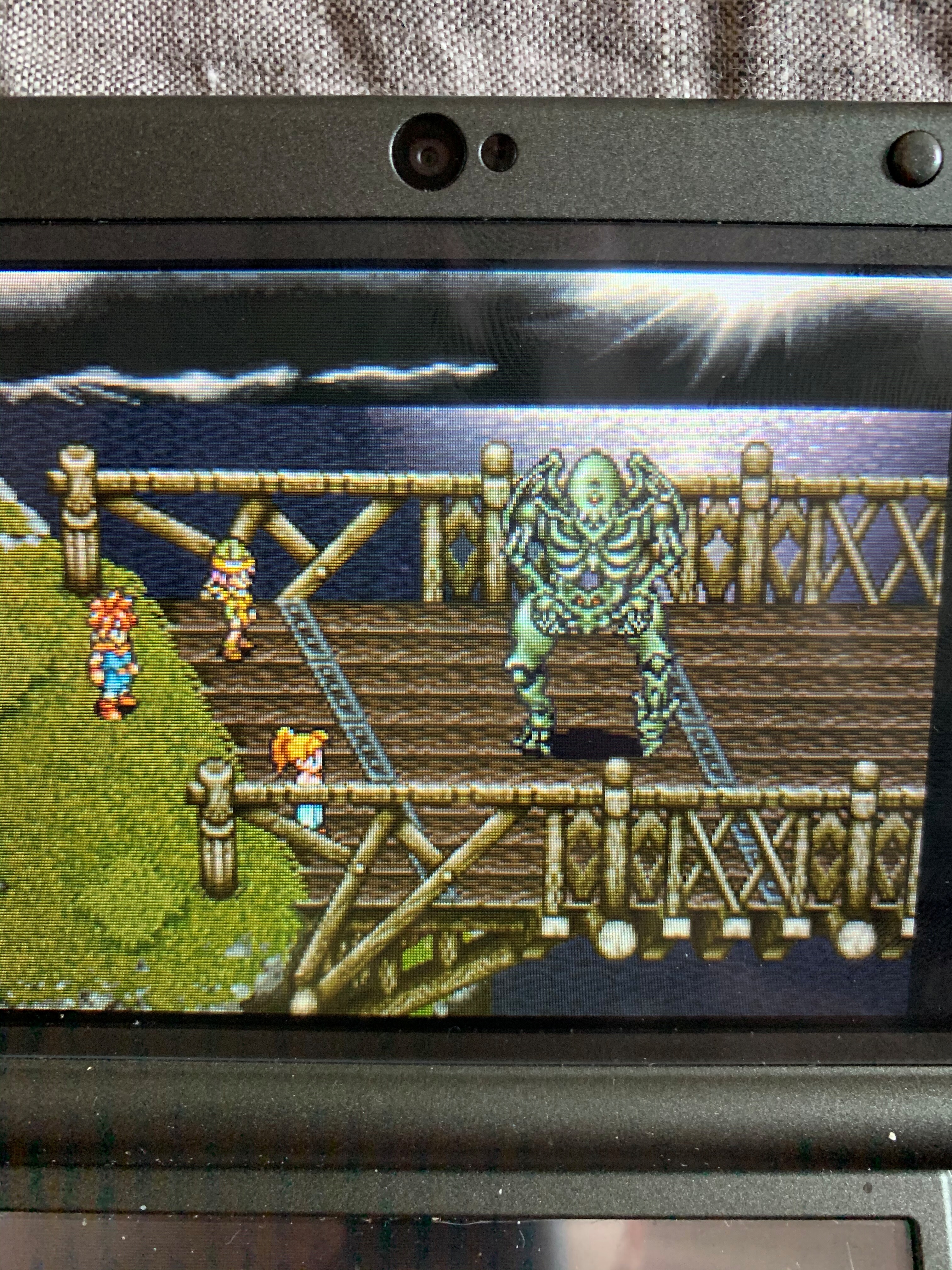 Chrono Trigger’s battle system is fun enough to keep you trying new things. Each character gain new abilities over time, just like in any rpg. The twist here is that some abilities require two or three party members, so you get this great juggling of extra power or extra turns. It helps that each battle is a little different. Enemies are either really resistant to certain attacks or just get pulverized by them, and this alternates with frequency. It doesn’t want you to get bored with menu-based combat, so its battles trick you into thinking you are both smart and buff. That’s what a video game should do! 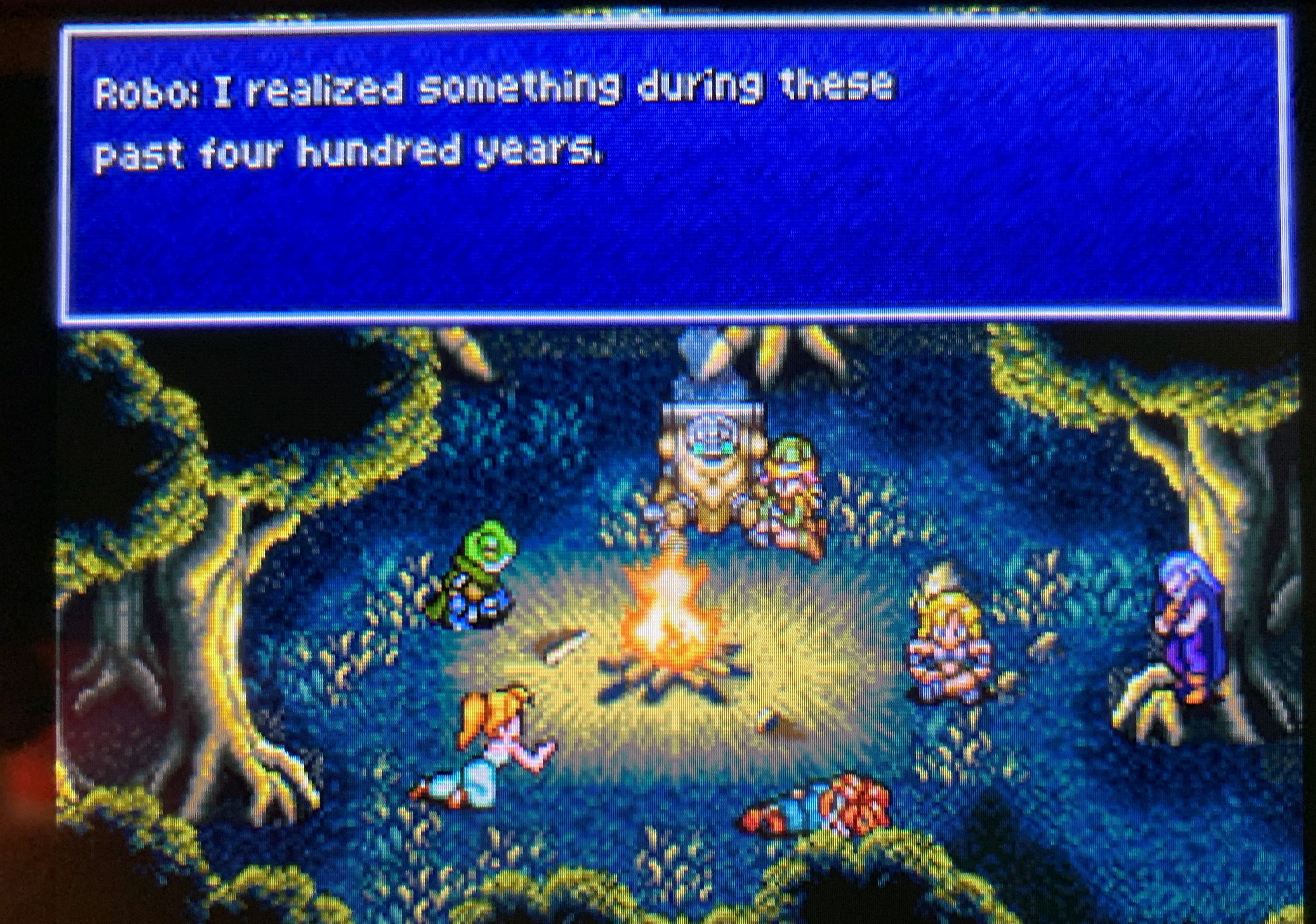 It took around 25 hours to beat. I probably missed a few side-quests but not many.

Everyone is right about Chrono Trigger. It’s a touching story that isn’t too saccharine. The characters feel just fleshed-out enough that you trust them and want them to succeed. I found no main character so annoying as to never want them in my party. That’s extremely unusual for this kind of game.

Game Finishing Season: Final Fantasy IX Here’s a weirdly common problem: I own lots of games I’ve never finished. Until recently, I didn’t actually know the number but I figured it was in

Game Finishing Season: Bye Bye Box Boy I love a good platformer. I love clean design and well-thought-out experiences. I love a game that doesn’t waste your time. So Box Boy is perfect.