I made some low-polygonal renders this month

I’ve been learning more about pixel art and low-poly renders, and here’s the stuff I’ve made while exploring.

First, a Punkt alarm clock. I made the face in Aseprite and the model in Picocad. I made 3 gifs and placed them one after another in ScreentoGif.

Then, I made a Nokia Lumia 1020. All six faces were made in Aseprite, and the model in Picocad.

Next, I made The Money in the Bank Briefcase from WWE. The faces were made in Aseprite, and the render in Picocad.

This one was the most difficult. It’s a Senz Umbrella. I’m not sure I did this correctly, but it consists of two shapes for the umbrella piece. The underside is flipped and rotated, so that there is different colors on the outside and inside of the object.

For the gif, I saved out each of the 3 Picocad Gifs, and stitched them back together 20 frames at a time to create the effect.

Finally, I bought a Nanoblocks model for an Eevie Pokémon and thought it would be a perfect fit for a drawing exercise.

For this, I made two projects. I made a simple pixel sprite using Aseprite: 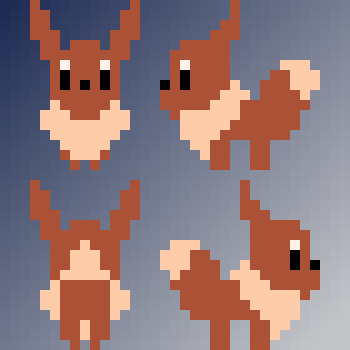 And finally, I made a 3D render using Magicavoxel:

It’s almost certainly the fault of spending too much time with the PlayStation 1, but my eyes find low-poly art totally beautiful. I think I’ve found a new passion.

You Chose Poorly S02E04 - Trash Cans and Recycling Bins Mikey and Sawyer talk about tech keynotes, Windows, The Mac, wanting to be sold an iPad, and whether or not caring about these things is a good

The Best of Youtube, July 2021 Youtube is a bad place, but every now and then a good video appears. Because I can’t seem to stop going there, I can at least make it easier for you