What Notion is Not For (for me anyway)

I tried using it as such, but it didn’t take. Lots of people use Notion for task management, so it probably is just me.

I’m a really good OneNote user, in that I use it as a canvas for all sorts of stuff like handwriting, loose notes, mind-mapping, screenshots, and links. I also keep more private things in OneNote, because that’s just a file on my own computer. OneNote isn’t structured at all, and Notion is so structured. That’s why, to me, it works best as a shelf and not a notebook.

It also isn’t where I’d put notes for my work, because, uh, the privacy thing.

I built a database of pro wrestling matches I’ve watched. I update it whenever I watch a new show. This was a real stress-test, since I had thousands of entries in that spreadsheet and were easy to import. It also allowed me to experiment with “related” databases, because I wanted two: one for matches, and one for the actual performers. Eventually, I was able to show a rating on a wrestler’s page that averaged out all the ratings I’d given their match performances. 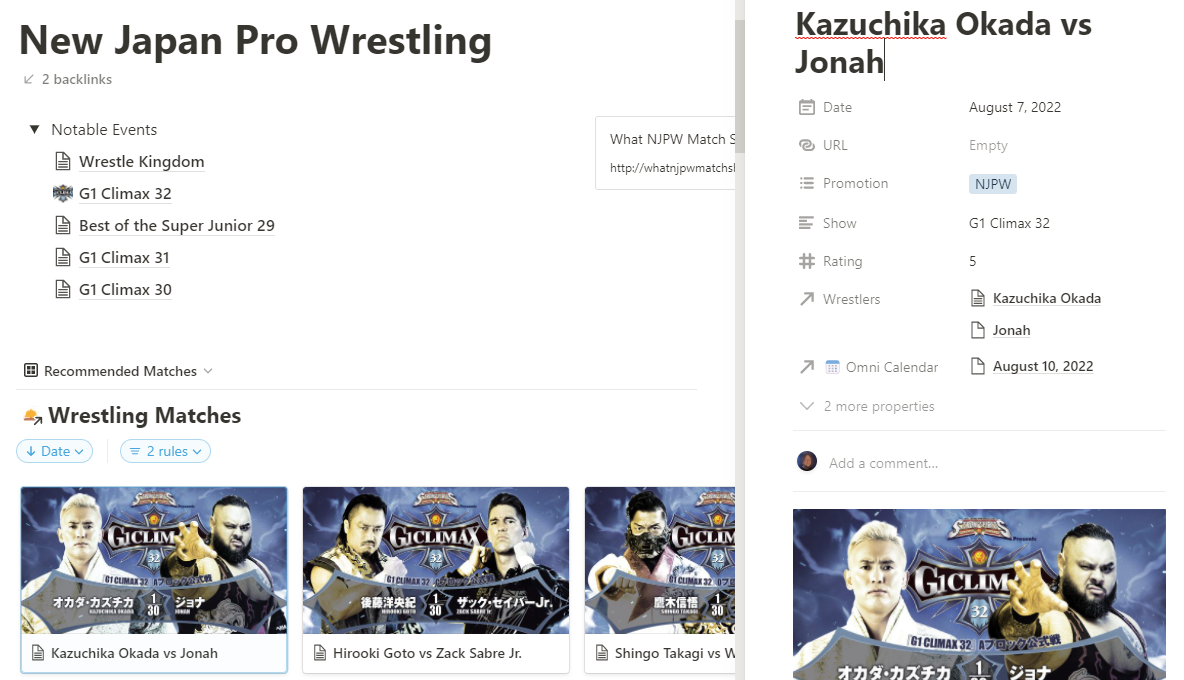 an image of a Notion database with side peek, containing pro wrestling stats

It’s also the only Notion page I have set to public. Feel free to poke around.

I have an apple watch, but if you’re not actively seeking out the “activity” or “health” apps on your phone, it’s really easy to forget your workout history. So I started tracking my workouts here, if only so I’d spend a minute thinking about the workout itself. This is also about looking at my own workouts as a method of motivation. So the database has things like “minutes” and “active cals” and “how do you feel”, fairly typical workout journal stuff. And because there’s a date attached, I can easily see how much I’ve done in a month. It’s replaced the workout posts I used to do on this blog. 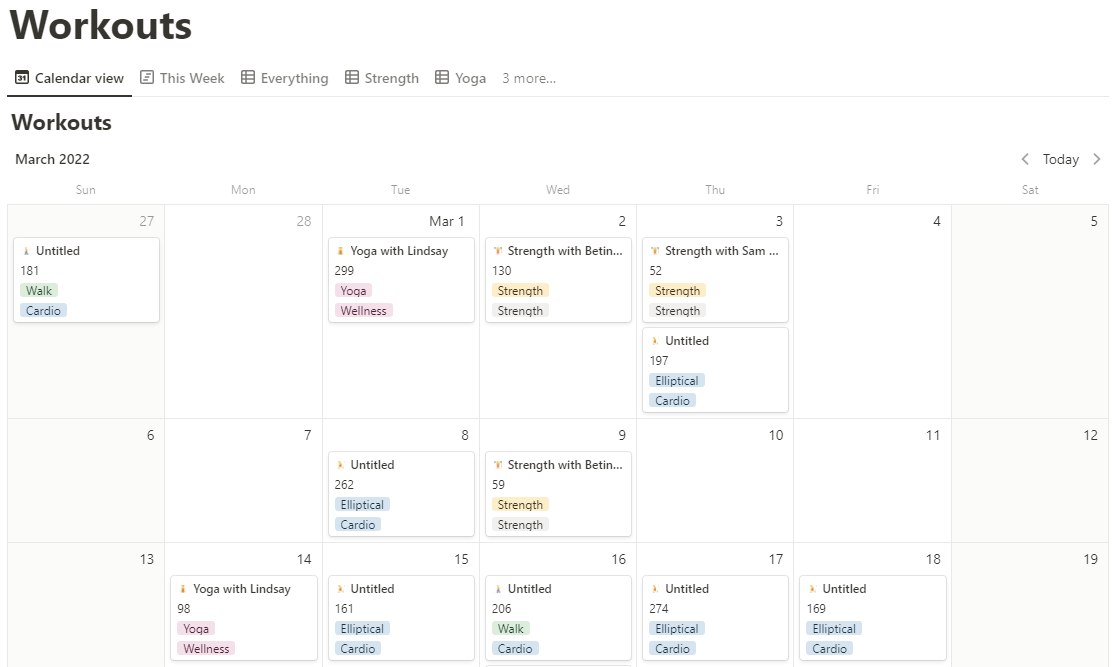 an image of a Notion calendar with workout data

I like to track the TV I watch. There are two popular services for this: TV Trakt, and JustWatch. Both have their strengths and weaknesses. JustWatch is the easier one, and it actually integrates with TVs. You can set it up as an app on your TV and launch every show from it (no more wondering, which streaming service is this show on again?). TV Trakt is excellent for more detail, playlists/recommendations from others, and organizing. But neither did the thing I actually wanted: let me rate stuff, and have those ratings do something. So I built a TV Tracker in Notion that did that. Using the same method I used with my wrestling averages, I build a relational pairing of “shows” and “episodes” that averaged out my ratings. 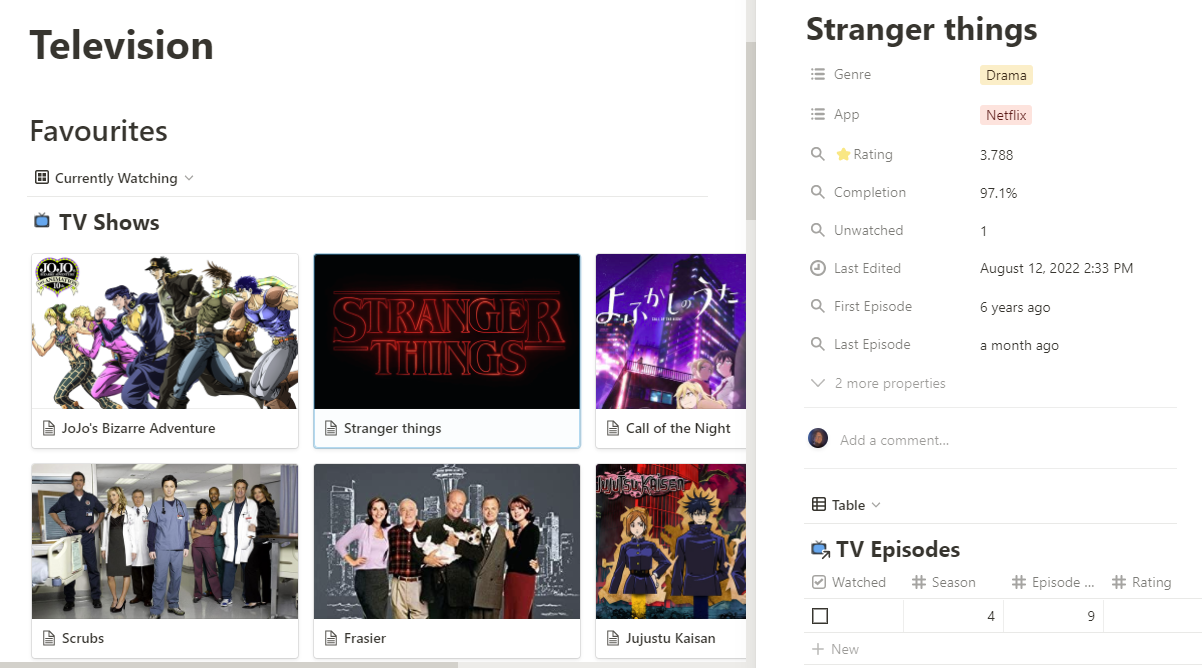 I thought about doing a similar relational thing here with “consoles” and “games,” but found I never really used it (this is a big lesson with Notion: building for more than your actual use case!). So this one is actually pretty simple, as it’s just a collection of games I own. It’s become my base for working on my backlog. My main view into it is “which games have I played some of but not enough to rate” and I go play those until I’m done. 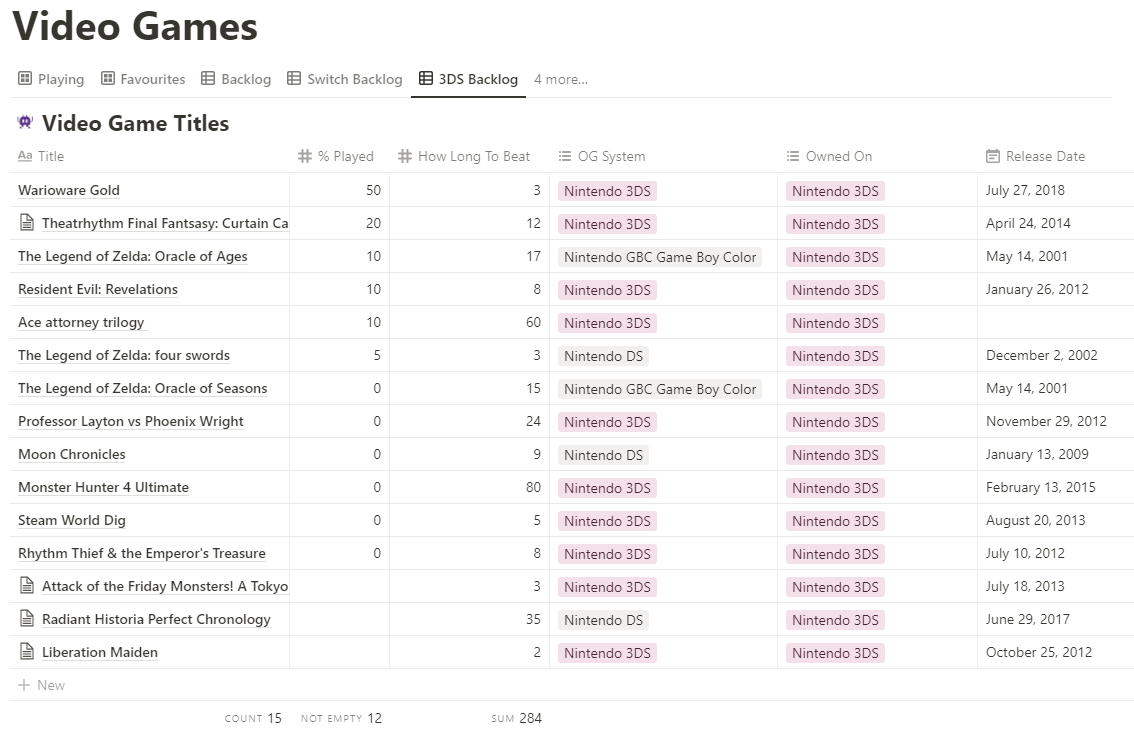 an image of a Notion spreadsheet containing my Nintendo 3DS backlog

It’s a similar setup to the video game list. 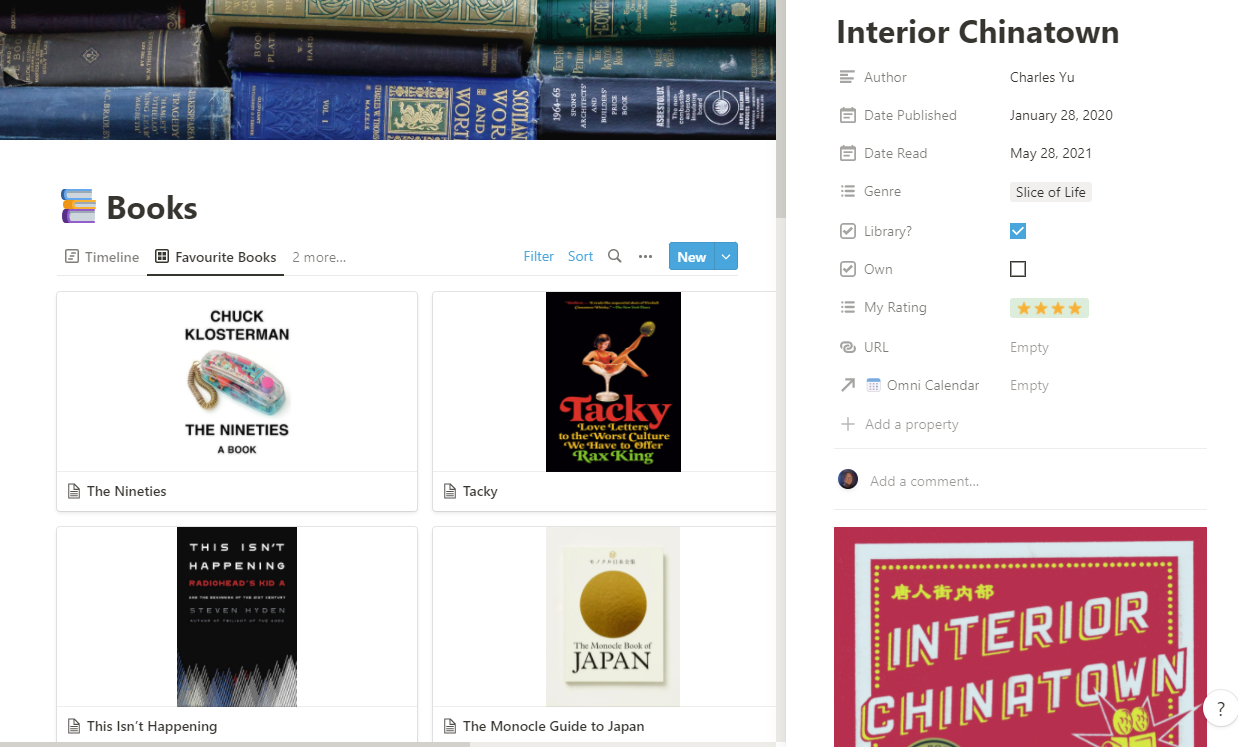 an image of a Notion spreadsheet containing recommended books

Music is my least fleshed-out database. It only has my vinyl (and a few mp3 albums) in it. I set it up to track how often I’m listening to any record. It’s mostly taught me that I don’t play my records as much as I thought.

This is my newest database. I’ve set it up to act a bit more like a lookbook (so I can see images of my clothes as I browse it), and it has a daily tracker, so I can see what clothes I am and am not wearing over time. There’s also a relational link to the store where I bought the item, and that lives in “Places.” 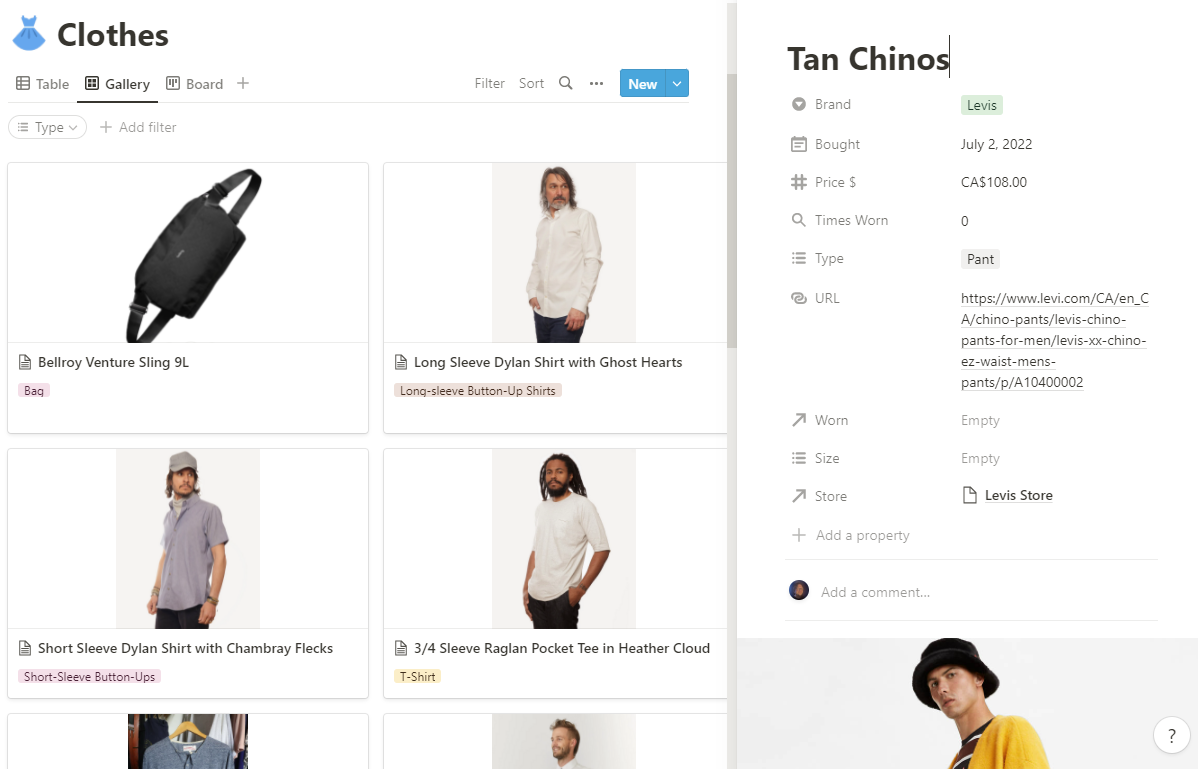 an image of a Notion database showing a list of clothes

It’s a list of places I’ve gone, when I’ve visited, and in the case of a place with food, what I’ve eaten there. It’s my newest one and has the least amount of stuff in it. 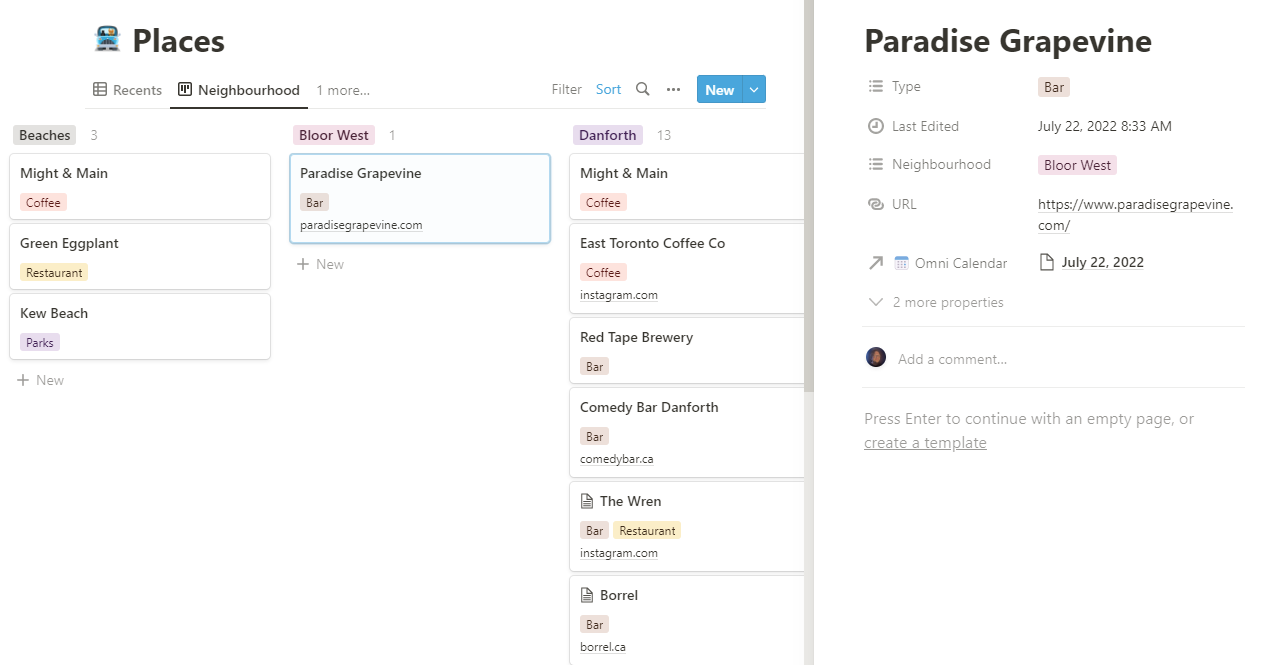 an image of a Notion database showing a list of places

This one is complicated. This is a three-part relational database, one with “recipes” and one with “ingredients. I’ve done a lot with this, and it acts as a food tracker (recipes I’ve eaten in a day), a recipe blog (imported and created recipes), and a place to put food I’ve eaten out (this is tied to the”places” databse). I’ve also built it so the ingredients list can also become a grocery list. How that works is, I have a checkbox in “recipes” called “on the menu.” If it’s clicked, it checks if the ingredients are in stock (a checkbox in the “ingredients” database). So if “on the menu” is checked, and “enough is stock” is not checked, the ingredient item gets added to the grocery list. 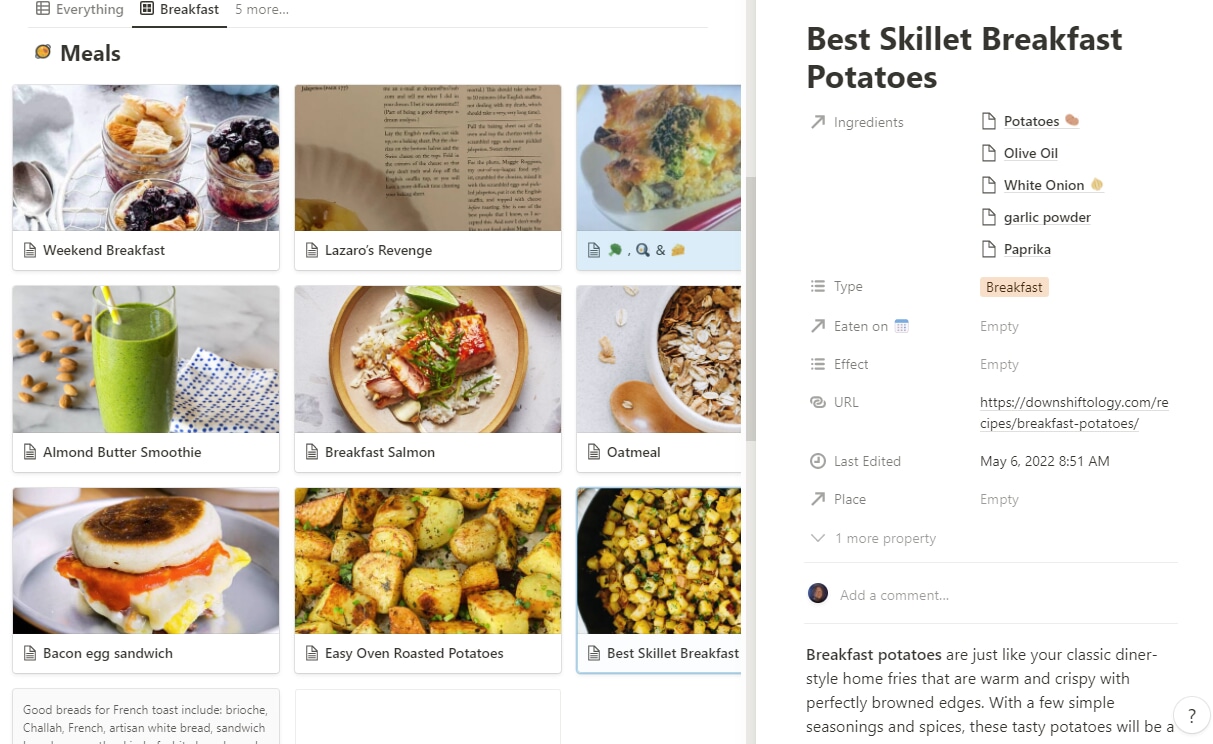 an image of a Notion database showing a variety of recipes

Bringing it all together in one Calendar

Every one of my databases contains something I might do on a given day. When I do that thing (eat food, watch a tv show, wear an item of clothing), I add a date to it. That date is actually a post in a calendar database I’ve called “Omni Calendar” (not affiliated with the Mac app).

Where this helps me is with my own daily journaling, as it gives me a nice list of things I’ve added to Notion on any given day. 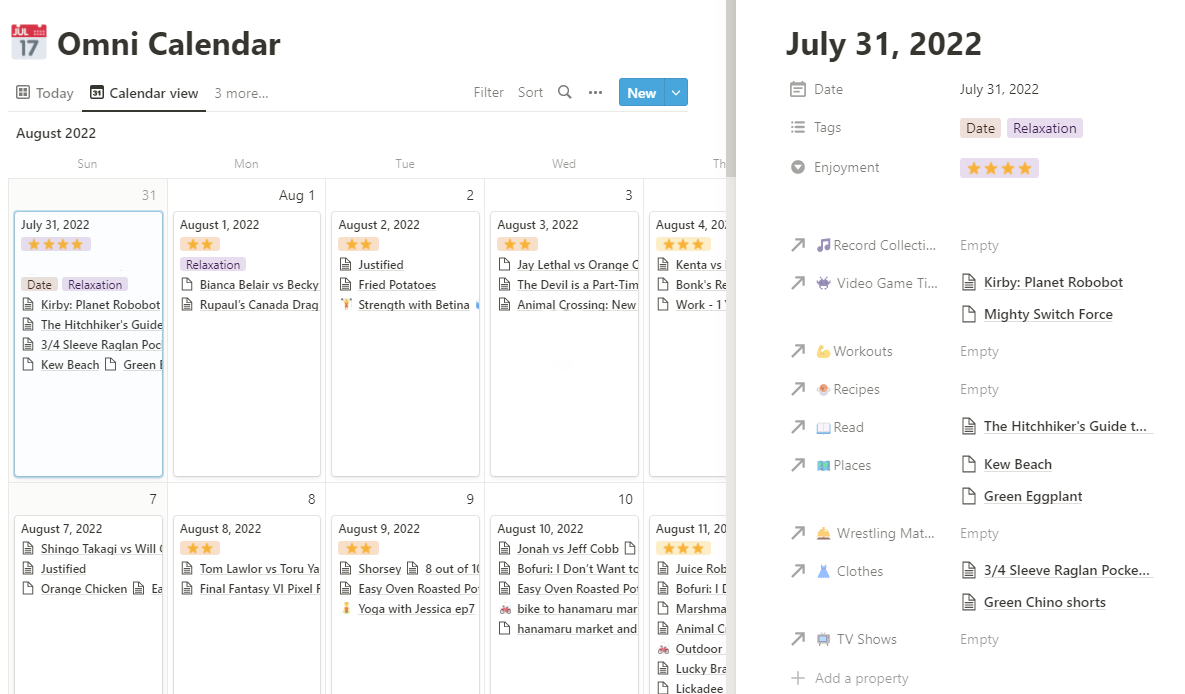 Maybe someday? I’d say they’re all in beta (and I’m the only person using them, so…). Maybe if I find other people who might want to try them, sure, but I’m not ready to release any of these for general use.

I tend to tweak all of them as I go anyway, so anything I’d release now would probably not look right six months from now. I’m not sure how people who release Notion templates factor this.

Having said that, if you’re trying to replicate any of this, get in touch with me, and I’ll try to help out.

This is a report on an app I began using around the beginning of the pandemic. It may have been a result of a little bit of hobbit behaviour on my part, but I’m mostly happy with how many things in my life fit into Notion’s structure. It seems like it would take forever to log this stuff, but it really doesn’t. I do most of it on my phone, and each thing just takes as long as it takes to type. Much like how owning a desktop computer comes with storage advantages, using something like Notion as a digital shelf is freeing. It can hold pretty much everything. Toss it all in there.

How listening to uninterrupted noise helped millions to focus Dave Lee for Ars Technica: Winston has observed that while many types of music thrive on the Internet, lofi beats is, uniquely, a genre created

How to Stay Cool Without Air-Conditioning Matt Jancer for Wired: Summer has come to mean record-breaking temperatures, raging wildfires, and heat-related illnesses. It can be hard to stay