My favourite movies released in 2022

What a tepid year for films, with one major exception.

Eleven older movies I watched and loved in 2022

My favourite new TV shows from 2022

My favourite continuing shows that aired in 2022

My favourite TV shows I watched from the before time

How I Streamed and Selected Music in 2022

A quick aside before I begin: When I use a

means star, or rating. Rail means rail. And yes, I use both, even though it’s probably redundant.

Also See: How I rate songs

I think there’s two ways of listening to music that cover every single instance.

First, there’s “streaming,” which is not just a streaming music service but any service that makes it easy to turn music on and have it play with little or no control. That’s radio. That’s concerts.

Second, there’s “selecting.” That’s where you pop a tape into a cassette and fast forward to the song you like and hit play. That’s the iPod. That’s your personal FLAC collection. That’s sometimes youtube when you want to see a specific music video. That’s adding a song to a playlist.

I’m sure I’m missing some examples, but I’m fairly confident I can cram any instance into one or the other.

This isn’t one of those “you’re one kind of person or the other” situations. Everyone does a combination of both when music is on. Some do one more than others. Some services encourage selecting, while others encourage streaming. And if you find yourself bored of music, it’s often because you’ve spent too much time on one side.

The reason I’m writing this is because I thought Spotify was a selecting service, but I’ve found over time it really wants to just be a streamer. I know that sounds glib because 100% of people think of Spotify as a music streaming service. But when you’re in there, especially on a pc, it seems like a place to select music. It looks like the same sort of management spreadsheety music selector we’ve all been using for twenty years. If you don’t look closely, it seems like it can replace everything iTunes used to do. But it can’t, and it doesn’t want to.

Let me rewind a little here. As long as I’ve been able to rate music, I’ve enjoyed doing it. Rating music is supposed to be doing your future music-listening self a favour. Supposedly, rating music helps an algorithm tune its streaming for you, but I’ve been using streaming devices for fifteen years and have seen very little tangible proof of this. What I do know is that rating music helps you, the user of the music library, find songs you like easier.

This year, Spotify removed the

button from the iPhone app for a little while. Whether it was a bug or not, I don’t know. They put it back, but it made me really think about how I use Spotify. It woke me up a bit.

The only thing tapping

in Spotify does is add that song to a

playlist in your library. You can’t search by

. You can’t ask Spotify to give you all the

songs from this year. You can’t ask it to filter

by genre. And maybe you don’t care! But it feels useless to add a data point to anything in Spotify, because there’s nothing you can get back with that data.

a song in Spotify. Zune could do that!

This doesn’t meant I won’t use Spotify anymore, just that I’ll use it the way it wants me to: as background music. As a streamer. I won’t use it as a library, or a playlist spot. It wants to be radio, so I’m going to treat it accordingly.

I’ve found myself using iTunes more this year because it lets me select and organize music better than anything else. It remains the is the only place to create and modify smart playlists based on ratings.1

I’d been cheating on Spotify a bit already. In 2021, I dug out my old iPod and had been playing with lossless audio (detailed on You Chose Poorly). In doing so, I became familiar again with iTunes. It’s so sad to say, but it’s still the best place to manage a music library. How has nothing defeated it yet?2

What About the dreaded gray stars?

After you’ve rated a few songs in an album, iTunes will “help” by giving the album a rating. This is annoying, because then the songs that haven’t received a rating don’t appear in smart playlists as unrated anymore.

There’s no fix for that as far as I can tell. These albums appear in playlists 5 and 6 (

these), and when they do, I remove the album rating. Usually, you only have to do it once per album. It is an annoying part of things.

At first, I was only going to use ALAC files I’d converted myself in iTunes. It was going to be my “personal” collection, and Spotify would remain where I’d stream everything else. But Apple Music actually integrates into my playlist set very well. Maybe I’ll regret that in the future, who knows.

Anyways, here’s my workflow for selecting and organizing music.

I’m able to keep everything organized with seven numbered playlists. These playlists are a little redundant, but the process works for me.

When I add songs to my library, they show up here. When I select

, it leaves the playlist.

show up here. Once I’ve given it a

, it leaves the playlist.

If I hit skip three times on a song with no

, it shows up here. It’s usually a pretty big hint I don’t actually like the song, and it’ll get

a song before giving it a

. This playlist collects those so I can clean it up later.

Sometimes I’ll give a song

before giving it a

. This playlist collects those so I can clean it up later.

Songs that have recorded a

end up here for deletion from my library. What I appreciate about Apple Music is it’ll keep the

on the song even if it’s not in my library.

At the end of this process, I’ve categorized songs in ways that I’ll find useful later when I want to listen to something I know I’ll like, and there’s a clear and easy flow for new music to come in.

And it should be clear, these playlists work just fine on mobile. You just can’t edit smart playlists anywhere but iTunes. 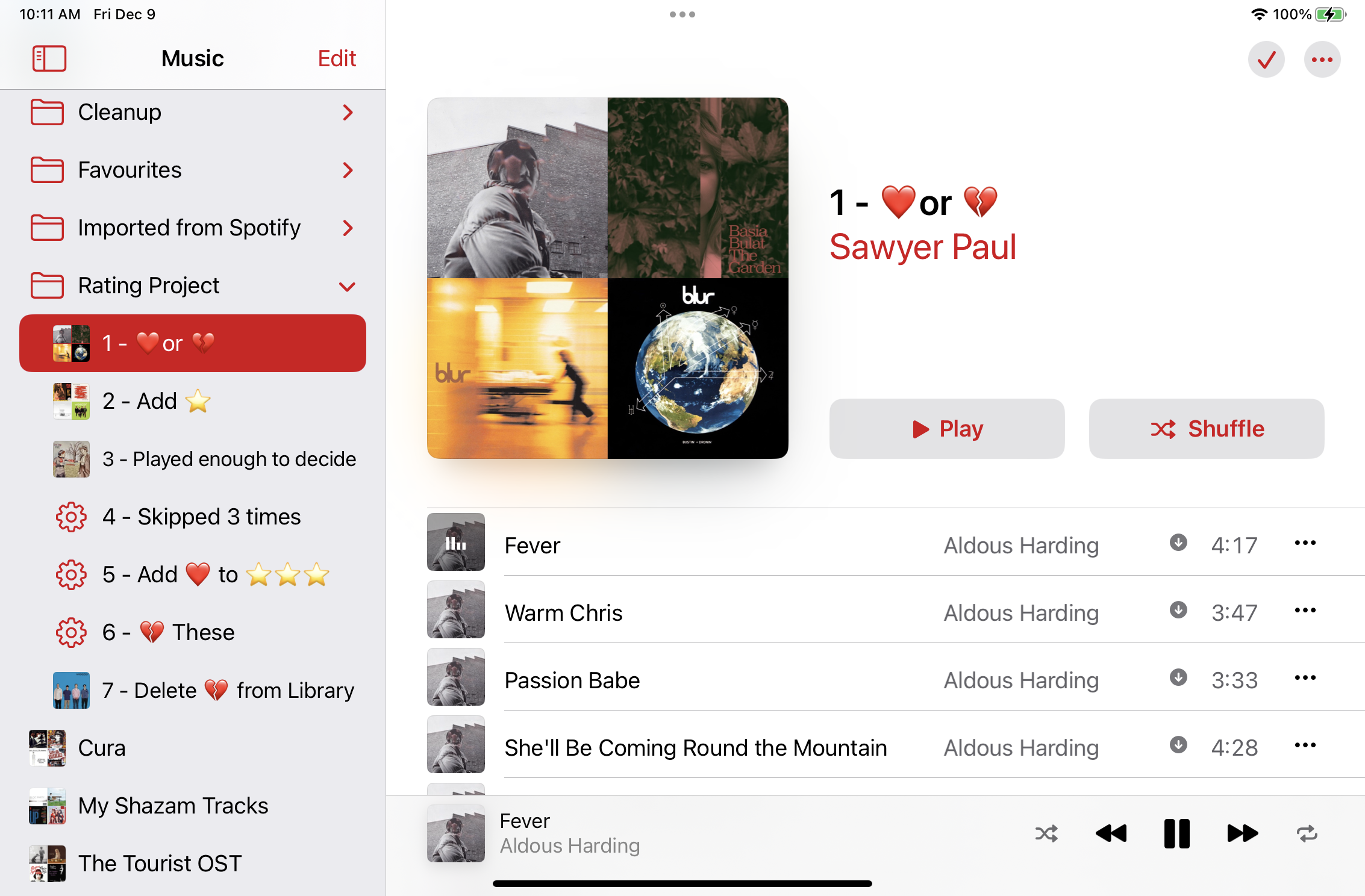 You can say “hey siri, like this song” into the ether and the first playlist will do its thing. Unfortunately, you can’t also say “hey siri, rate this song three stars.” You have to click the menu button, click “Rate Song…” and then give it a rating, like an animal.

Spotify’s Release Radar and Apple’s New Music Mix are both useless. Discover Weekly hasn’t been a rewarding experience in years. Algorithmic music discovery has mostly been a fraud.

I’ve tried several apps that try to comb your collection and inform you when there’s new stuff by those artists. None of them work well enough to warrant a recommendation.

I’m finding new music by shopping in record stores and reading blogs. I don’t think I visit any particularly niche ones, but here are my go-tos:

The ratings project feeds into a few playlists that benefit from the data.

The main one is just called “Radio,” and it’s a selection of 100 songs I

that haven’t been played in the last six months. I find that’s just long enough for me to want to hear something again.

The other playlists are usually artists or genre-based, using a mixture of ratings to filter down.

Some recommendations at the end

Here’s my favourite albums from 2022:

Now, 21 years later, it is comforting to see game studios pushing and trying for better representation in all gaming spaces, both physical and pixelated. Inspired by my own memories of Kris in Pokémon Crystal, I spoke to four individuals in the game industry about their experiences designing for gender inclusivity, and how their own experiences playing games have affected their approach to their work.

As someone who almost always picks “girl” in games when given a choice, I’m probably not thinking deeply enough about that.

Tycho at Penny Arcade, on their blog:

I guess I remember that there was an Internet before it was carved into a sequence of predicable, increasingly boring corporate fiefdoms. The purpose of these fiefdoms is to make absolutely sure you can’t accomplish something online they can’t monetize. If I was going to replace Twitter, you know what I would replace it with? Nothing. It’s all unpaid labor. It would be better to replace it with kettle bells.

If Twitter dying (and, at the same time, fewer people using Facebook and Instagram) means we get the 2006 internet back, that makes me happy. I’m not that optimistic. There’s a social media vacuum, sure. But when was the last time the space got filled by something good?

Nov 1: Maybe I’ll just get some bad first drafting done, and that’s okay! Happy to be focusing on my writing this November. Nov 2: Realized I have no plot. It needs more vampires . . . ? Sign up for acupuncture, cupping, and salt therapy to tap into my source energy.

That’s pretty much how mine went.